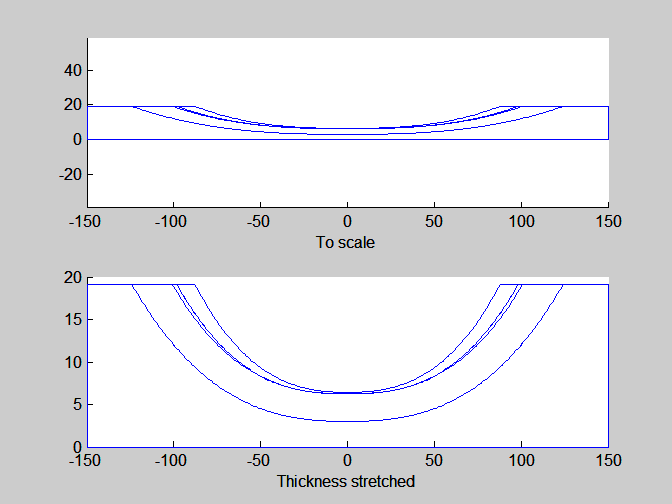 Finding the beam theory papers was just a baby step to designing my own bars. What I needed was software to apply the math. It may have been possible to write the software from the math in the papers, but software like that can be very difficult to write and debug, especially given my very tenuous grasp on the mechanical engineering concepts that underlie it. My breakthrough moment was when I found a masters thesis on the web that was written by Mingming Zhao. The paper, called “Automatic multi-modal tuning of idiophone bars,” utilized the standard beam theory to compute the bar shapes, but most importantly, the appendix contained the actual Matlab code that applied the beam theory!

Comments in the code indicated that is was a modified version of software written by Dr Rodney Entwistle. So I looked up the Entwistle paper too, which is cited below along with a web link. This paper provided some excellent background and context for the Zhao paper.

I started by copying the Matlab functions from the PDF file of the Zhao thesis to discrete files. To confirm that I had copied the code correctly, my first task was to verify that I could repeat the results from the paper. The following is a code snippet that was modified from code in appendix G.1 of the paper. It demonstrates the convergent nature of the algorithm. It takes as arguments the target frequency (300 Hz), the desired ratios for the 2nd and 3rd partials (4.0 and 9.8), the undercut functional form (cubic) and a seed for the iterative algorithm. Here is the run and the program output (captured in Matlab comments).

In the highlighted line at the end, you can see that the algorithm converged to the desired final frequency and ratios in just a handful of iterations. It also provided the  coefficients to the cubic that provided the desired overtones.

The graphical output from this run is at the top of this post. The two figures show the computed bar shape with the bar lying upside down (i.e., with the undercut at the top of the plot). The top figure has an aspect ration of 1:1, and the bottom figure zooms the y axis to better show the curve shape. There are multiple profile because the figure redraws the computed profile after each iteration of the converging algorithm. The line corresponding to the most broad undercut came from the final iteration of the code.

This was pretty exciting! I finally had working code that could predict modal frequencies as a function of a specified bar shape.

Using the Code To Design My Bars

As previously stated, I had decided to design my bars to conform to the “double minimum” shape that I had observed on most of the commercial xylophones. To gain experience, I set out with the following plan in mind:

I chose a cubic function for the undercut profile. The choice was motivated by the fact that the cubic profile could realize the desired double-minimum shape, but the parabola would have limited the shape to a simple arch shape. The math that computes the bar shape required information about the material type. The code needs the following parameters:

I measured the density directly, by measuring a prismatic section of the wood and weighing it. I computed the density as 650 kg/m^3.

The moduli were harder to come by. I found the following reference in the Orduna-Bustamante paper previously cited: “N . E. Molin, L-E. Lindgren, and E. V. Jansson, ‘Parameters  of violin plates and their influence on the plate modes,’J . Acoust.S oc.A m. 83,
281-291 (1988). Ratios of Young’s modulus in the longitudinal direction to the shear modulus are reported as E/G=22.1 for spruce wood and E/G = 6.9 for maple wood.”

OK, so given Young’s modulus, I could compute the shear modulus. I found a value of E=12.6 GPa here. I found a second reference here that gave E=12.6 Gpa. So I split the difference and set E=12.5 Gpa.

The algorithm to compute the bar profile needs a “seed” to start its iteration. I used a photograph of the Yamaha bar to compute coefficients of a cubic that approximated the bar shape. However, there was a snafu; the algorithm failed to converge to a solution. It uses a fairly basic Newton-Raphson method of minimization to approach the solution. I am not sure why, but this had some problems. I could have probably worked out why this was the case, but I rather chose to use a Matlab minimizer called fmincon that I was familiar with. An advantage of this minimizer is that you can set constraints on the minimization, like disallowing solutions that yield a bar that is too thin. With the code modified to use fmincon, the algorithm converged! Here is the code that I ran:

The highlighted line shows that the algorithm gave frequency ratios for the overtones of 3.00005 and 7.51121. The first overtone was dead on, but the second overtone failed to achieve the desired ratio of 6. I tried many variations of the minimizer, but could not coerce it to yield the desired value of r3 (shorthand for the ratio of the third partial to the fundamental). I don’t know why this is the case. Perhaps it is not possible to yield the desired overtone ratio with a cubic function. In any case, as previously stated, I decided to forgo tuning the third overtone, so I didn’t work this problem further.

Here is a figure illustrating the shape of the resulting bar.

The red profile in this bar corresponds to Maple. The blue profile was computed using the properties of Rosewood. I plotted both to assess the difference between the two materials.

Yee-haw! This seems kind of reasonable. Next step – make the bar out of wood. You’ll hear more about that in the next post (if anyone is still with me…).

Stone, B. 1992. “The receptances of beams, in closed form, including the effects of shear and rotary inertia,” Journal of Mechanical Engineering Science 206 (2): 87-94.

8 thoughts on “Putting the Math to Work”